This 0.5 km2 area on the West Coast is about 90 km southwest of Burnie and 200 km northwest of Hobart. It can be reached via Queenstown or Rosebery on the Murchison Highway, a good sealed road. Access to the site is easiest via the Williamsford Road. There is a turnoff to the west about 4.3 km from the Murchison Highway junction, from where a four-wheel drive track is driveable for about two kilometres before the track becomes overgrown, with fallen trees and boggy patches. About 3.5 km along the track is a fork, and fossickers should take the western fork for another 500 metres until the mine dump is reached.

Travellers should be prepared for snow and other severe weather conditions at all times (both on the road and in the bush).

The collecting area lies at the top of Colebrook Hill, 4.5 km southwest of Rosebery. A large open cut on the southern side of the hill, close to the summit (at AMG reference 374 800 mE, 5 371 700 mN) affords a good collecting location.

This location has produced Australia's best ferroaxinite specimens, some of which are world class. The deposit occurs in an unusual rock type, sometimes described as a limurite or axinite-hornfels. The rock has formed because boron-rich solutions from an underlying granite reacted with limestone or other reactive calcium-rich rock types. The mine was originally worked for copper, but minor silver, gold, tin, lead, zinc and tungsten minerals are also present. The deposit is very complex and of great mineralogical interest, and is presently being worked for specimen minerals, most of which need to be acid-treated to dissolve the enclosing calcite.

Minerals, many rare, that can be collected and identified in hand specimens include:

Ferroaxinite Ca2(Fe,Mn)Al2BSiO4O15OH - this is the dominant mineral in the lodes and occurs as massive or crystalline material of a deep violet colour. Well-formed wedge-shaped triclinic crystals up to 20 mm in length occur, and may be very lustrous and attractive.

Arsenopyrite FeAsS - rather abundant as massive material or as excellent orthorhombic crystals to about 10 mm, with a bright silver-grey colour.

Quartz SiO2 - this is quite common as massive material and as hexagonal crystals, milky white in colour, to about 20 mm in length.

Tremolite-actinolite Ca2(Mg,Fe)5Si8O22(OH,F)2 - this occurs as a massive, coarse-grained fibrous material, and as radiating aggregates and ragged to fibrous monoclinic crystals, up to a centimetre or so in size. The colour is usually a pale grey-green.

Scheelite CaWO4 - this mineral has been reported to occur rarely as small groups of white tetragonal crystals. 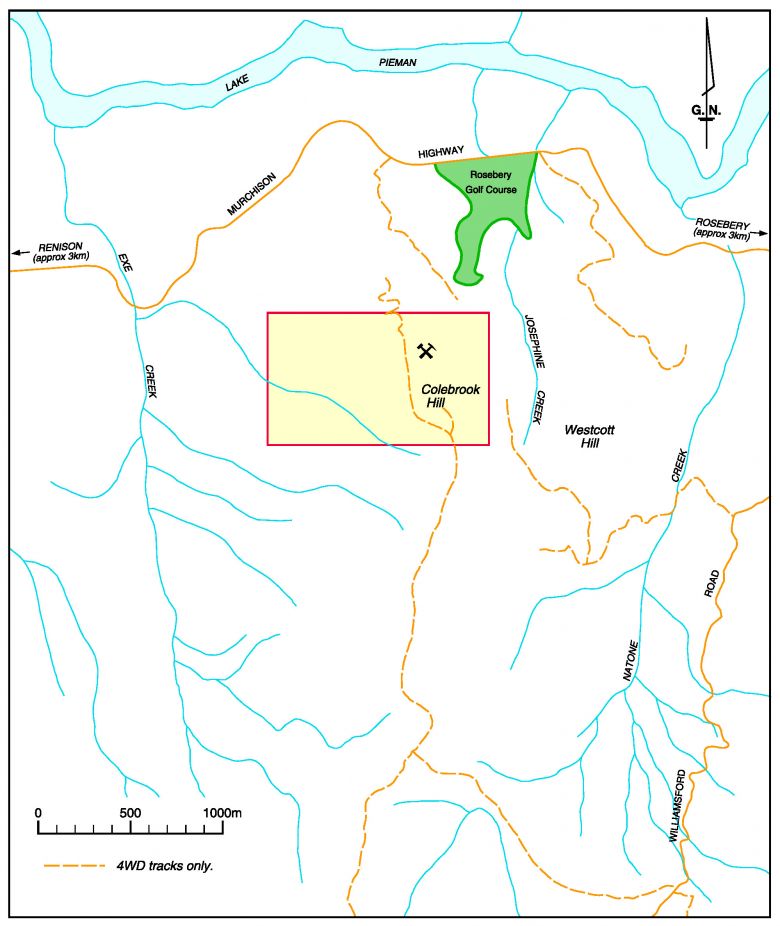